Year 6 visited Beamish Museum dressed as World War II evacuees. The experience was designed to support their history topic – a local study of a theme in British History.

The children learned about the wartime home front and what it may have been like to be evacuated into the countryside. Among many other activities, they cooked carrot biscuits, blackened windows, wrote post cards to their families and rode in a tram. They had a super day and really felt as they had been evacuated.

Don’t worry about the sadness on their faces, they were acting! 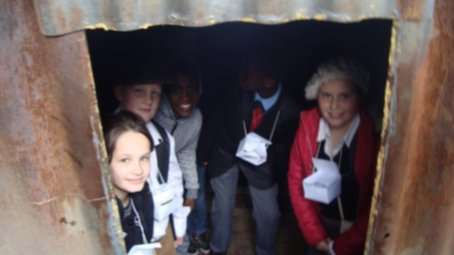 The evacuees activity really began with preparation in school. They had a visit from a billeting officer who brought suitcases full of WW2 artifacts.

They even tried on a real gas mask. After that everyone made their own gas mask boxes, luggage labels and identity cards in preparation for the big adventure.

Year 4 have had an extremely busy half term with lots of visits and visitors coming into school. Our Roman topic has kept us extremely busy. We visited Segedunum and it involved training like Roman soldiers, handling Roman objects and looking at the remains of the Roman fort there. We also dressed up as Ancient… END_OF_DOCUMENT_TOKEN_TO_BE_REPLACED