St Lawrence’s were defeated 5-2 despite an excellent performance against a brilliant Cragside team on Tuesday 1 November.
In an extended 50 minute match Cragside, featuring two academy players, started very brightly and raced into the lead with an excellent strike that whistled into our net from distance.

Despite this setback, St Lawrence’s made a spirited response and equalised with a fine strike from Junior Baptista after a searching pass from Kaiden Fulcher Grimes.
We had chances to take the lead in an increasingly even match with Edson Seldo, Lloyd Tunmore and Kaitlyn Renwick making some excellent defensive blocks. Owen Armstrong, meanwhile, was performing heroics in goal. 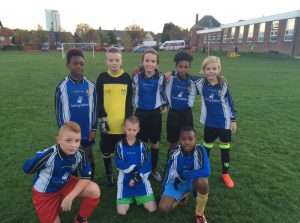 Eventually though, Cragside’s pressure told and they scored two goals late in the first half to establish a 3-1 lead.
However, St Lawrence’s re grouped and Noah Kanu set up Junior for his second goal just after half time to put the match back in the balance at 3-2.

The match switched from end to end as both teams attacked in a thrilling match before two late goals from Cragside gave the scoreline a slightly harsh and lopsided look.
Overall though, it was a fantastic effort from our team against truly excellent opponents. Mr Brown and Mr Jeffrey were delighted and the team left with their heads held high.