Over 100 KS2 children from Byker primary, St. Lawrence’s primary and St. Teresa’s primary school will be taking part in this new musical work by music education writer Caroline Hoile, which was especially written and composed to raise awareness about people seeking sanctuary amongst primary school children and their audiences.

On October 19th they’re coming together for the first time to collaboratively perform a world premiere of the work, on stage at the magnificent Tyne Theatre & Opera House! 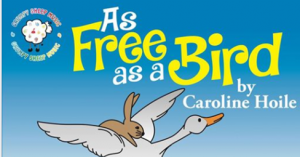 Although a serious topic, ‘As Free As A Bird’ is engagingly written for children using animal characters. There’s lots of singing, with songs ranging from hauntingly melodic to exuberantly rhythmic raps.

Woven into the drama is the juxtaposition of the freedom of migratory geese against the lack of freedom experienced by those displaced – (in the musical, a little rabbit family are the characters seeking refuge.)

Between powerful storyline and meaningful song lyrics, ‘As Free As A Bird,’ hopes to promote understanding and raise awareness about people who’ve been forced to flee their homes. And its message of sharing, caring and the power of love couldn’t be more appropriate for today’s world.

Year 1 and 2 are very excited to be going to watch our Year 3 friends performing on Thursday afternoon (19th October 2017).