Having read a number of texts from different eras (Shakespeare’s Macbeth, WWII Boy in the Striped Pyjamas and Charles Dicken’s A Christmas Carol) we were keen to look at a more modern story to base our next unit of writing on.

Holes, by Louis Sachar, is set in America at around the turn of the Millennium. It is about a boy called Stanley Yelnats, who is sent away to a juvenile correction centre in the desert for stealing some trainers.  The dialogue contains lots of American slang and the characters have a number of issues, such as homelessness, that have led them also to being sent away.

The title of the book, and subsequent movie, is based around the fact that as a punishment those attending Camp Green Lake centre, which actually has no lake or any greenery, are made to dig holes every day.  No one is sure why, but eventually it becomes clear that the Warden is looking for something important.

Our 1st piece of writing looked at a diary entry that Stanley would write after he makes a discovery, whilst digging one of his holes.  We thought about his feelings, which are complicated by the fact that he has promised to give any of his finds to his group’s leader, and also the incredible setting of the baking hot, desolate desert.

Our next step was to plan out our writing, organising the words and phrases we had collected into a structure, and complete a rough first draft in our draft writing book.

After completing our first draft, we edited and improved our work with a green pen, before writing it up in our Writing Book.  We produced some incredibly emotive diaries, which really got across the mixture of feelings that Stanley had to deal with.

For our 2nd piece we looked at the character of the Warden and her actions.  She has a very dark personality – treating some of the prison workers as badly as the inmates themselves.  We watched a clip of the film, where the Warden, superbly played by Sigourney Weaver, before discussing how we could use powerful descriptive language to describe her.

After acting out a playscript of a scene together, where Stanley meets her for the 1st time, we all wrote a scene where our own character meets her. Again we drafted our work before editing it to improve our grammar and vocab.  We have really enjoyed Holes and would also recommend the film.

Finally we looked at the life of Louis Sachar and wrote a biography about him. He has a very interesting personal story, which unfortunately included the death of his father at an early age and the fact he only became interested in reading once he became a teenager.  Working in a school, while he was doing his law degree, inspired him to write for children as did his wife’s job as a school counsellor. 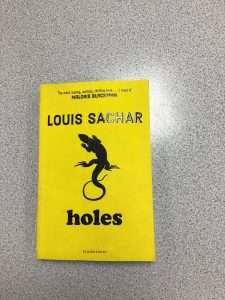 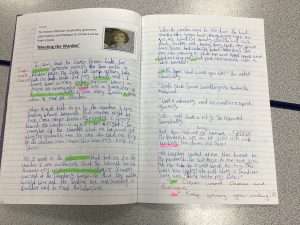 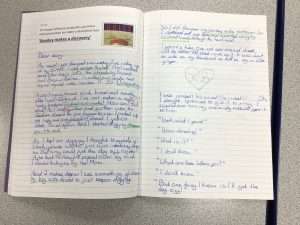