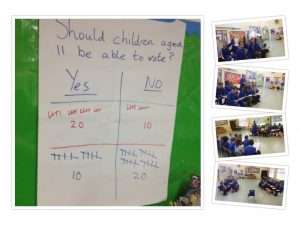 Year 6 looked at democracy as part of British Values week.

We discussed the role of parliament and how the electoral system worked.

The class then debated whether children over 11 should be given the vote in a bid to encourage more people to get involved in politics and ensure children have a voice about important decisions.

Others argued that it was too much to expect children to be able to understand what was going on and they could become victims of peer pressure.

Initially the class voted 20 to 10 in favour of moving the voting age but after a proper debate, during which they read out their own prepared speeches, the 2nd vote saw a 20 to 10 vote against changing the voting system.