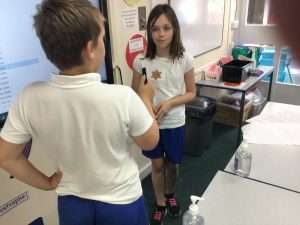 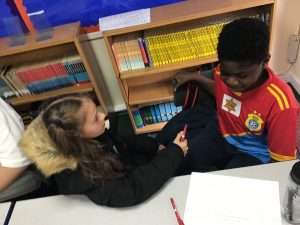 In class we discussed how things changed in Germany once Hitler was elected Chancellor in 1933. Germans were furious because land and money was taken off them by the Allies after losing World War 1.  On top of this the ‘Great Depression’ saw millions of Germans left with no job so people were angry and Hitler promised to make Germany great again – so people voted for him.

He also began blaming Jewish people for taking money away and helping to ruin Germany. The introduction of the Nuremburg Laws in 1935, where Jewish people could no longer vote, marry non-Jews or have German passports, was the start of things to come.  Jewish homes were taken from them with people forced to live in ‘Ghettos’. Eventually this led to the ‘Holocaust’ where 6 million Jews died in Concentration Camps.

We pretended to be one of the last Jewish refugees to arrive in Britain and we were interviewed by a BBC reporter.  We explained how horrendous things had been for us back in Germany just because of our religion.